For first year color, it's hard to beat annuals. The more time seedlings have to get well rooted, the bigger and longer the bloom in spring.

To continue yearly production of annual wildflowers, allow plants to set seed before clearing spent plants away from the area.

Popular wildflower variety grown in gardens. Blooms are produced at the ends of 6" to 12" stems, well above the foliage, so that in a breeze they nod and flutter in the breeze. Flower petals open & close in response to temperature. To prolong bloom in hot inland areas, provide some afternoon shade. Grows up to 6,000' elevation.

Named for their fancied resemblance to pagodas. The two-lipped flowers are produced in dense whorls reaching 6" to 15" tall in full bloom. Part shade & regular water are best. Natural habitat is concentrated in shaded slopes in many plant communities. Grows up to 5,420' elevation.

Erect growth to 1' to 3' tall and wide with nice branching (give this plant some room). Blooms are produced over a long period from late spring through early summer. Typically dark pink, but flower color may vary from white to rosey-purple on different plants. Will tolerate some afternoon shade in hot inland areas. Native to grasslands, chaparral and woodland areas from Lake county south to San Diego County and east to the Sierra Nevada foothills. Grows up to 4,500' elevation.

Early bloomer found on moist, sunny, grassy slopes. Inconspicuous foliage blends in w/ other vegatation until masses of white blooms burst open, seemingly all at once. To prolong bloom in hot inland areas, provide some afternoon shade. Native to the Sierra foothills and mountain slopes below 7,500' elevation from Nevada County to the north of Kern County in the south.

Small, individual pale sky blue flowers are held in tight head-like clusters on the ends of stems ranging from 6” to 2’. Found from British Columbia to Baja California, growing in fields, on banks, in chaparral or oak woodlands, up to 6,000' elevation. An excellent companion to other California wildflowers.

The genus was named in honor of Captian William Clark of the 1804 Lewis and Clark Expediton. Also known as ‘Fairwell To Spring’, expect a beautiful show of lilac pink blooms w/ crimson blotches in late spring to early summer. They make a nice cut flower. Plants grow to 1-2 ft tall & re-seed freely. Best in full sun & regular water while blooming. Grows up to 4,500' elevation.

Found in grasslands or inland valleys, and on open slopes of the foothills up to 4,500' in the lower ponderosa pine forests.

A low growing early spring blooming annual to 8 in tall. Named at full bloom for its solid canopy of creamy white flowers. Native to the Central Valley and north to Southern Oregon. Adapted to poorly drained soils, moist or sporadically dry. Grows up to 5,400' elevation. Found near vernal pools and grasslands. A good choice under water features. Pollinators love it!

Deep golden yellow flowers are wrapped around the stem in tiers on 10” stalks. Lupines have nitrogen-fixing abilities which make them especially garden-worthy. Grows up to 4,800' elevation.

An easy wildflower that grows up to 18" tall. Small four-petaled pink to purple flowers are bowl (wine cup) shaped often with darker pink or purple spots. Blooms from mid to late spring. Makes a lovely cut flower. Nectar producing - attracts birds, butterflies, and bees. Best grown in full sun to some shade. Found in meadow and woodland habitats from BC south through Washington, Oregon, most of California, and parts of Arizona up to 6,000' elevation. Reseeds well. 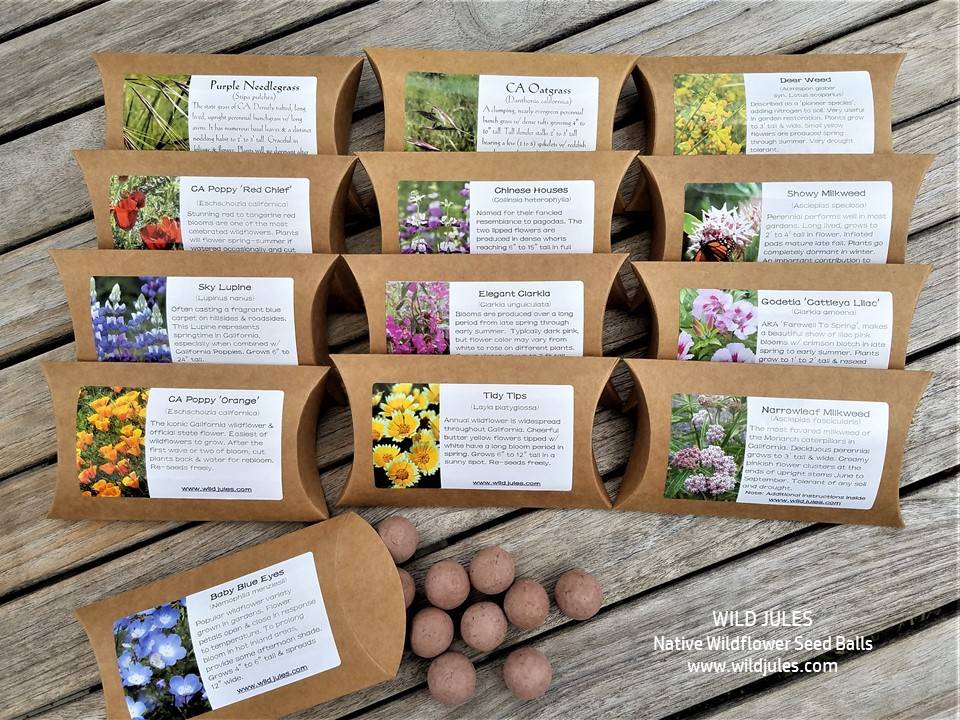